Illumination Entertainment chief Chris Meledandri has acquired rights to turn the Uglydoll franchise into an animated feature film. Universal Pictures and Illumination will develop the film based on the global line of Uglydoll characters launched by husband-wife artist team David Horvath and Sun-Min Kim. Meet the Fockers scribe Larry Stuckey will write the script, inspired by the dolls and stories created by Horvath and Kim. Meledandri will produce, and Horvath and Kim will be executive producers through their Pretty Ugly LLC banner. The plan is to start with the feature and then branch into a wider range of media opportunities.
Posted by DAVIDUGLY at 4:29 AM 6 comments:

Our Uglydoll flagship store in Seoul
has hit #1 just before it's first anniversary!
Congrats to the entire team in Korea!
If you are in Seoul, please stop by!
We are right under the stairs! 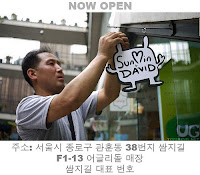 What is UGLY? To us, Ugly means unique.
When Sun-Min and I first met, our first ever conversation
was about what ugly really meant to us, and how we
felt we should all be celebrating the funny little twists
and turns which make us who we are, inside and out.
Ugly means special and different!
At least, that's what my mama used to tell me.
Hey wait.
Posted by DAVIDUGLY at 6:58 AM 6 comments: 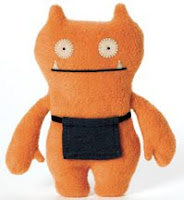 Sun-MIn sewed together the very first Uglydoll, Wage,
10 years ago this December, and the 10th
anniversary of the very first Wage to ever be sold
in stores is coming in 2012. We have something
very special planned for mid 2012 to celebrate
Wage's birthday so stay tuned! Wage has always
been one of our best sellers but because the
special shops we sell to always want new and new
and new, we had to make room.
We are completely out of Wage at the warehouse so
if you have one, go get him a "10" candle and
a cup cake ( non GMO please ) or
maybe a salad. 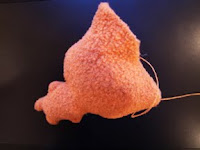 Wage version zero?
This was the first attempt at sewing for Sun-Min.
The second ever item she ever sewed was Wage.
So this goes to show you kids, never give up,
especially after your first attempt.
I fail all day long, doesn't phase me one bit.

Speaking of fail, I was sure these were going to.
I grew up LOVING the little unpainted "Keshi" figures
from Japan as a kid. Somehow I had Keshi figures from every
brand from Star Wars and Sentai to Anpanman and
Mario brothers. So here they are, from my childhood
but mostly inspired by our dozens of trips to
Tokyo over the years, LUCKY UCKYS!
These are the little spirit guides who helped us
find the rare treasures in Japan...now headed
to your pocket. The yellow ones help with
your quiz! They aren't erasers, so not THAT
kind of help. Anyway I hate erasers.
I never use them. It's all one big mistake,
so why erase it. Embrace it.
These were by far the most popular item
for us at Toy Fair with buyers, so
my destined to fail project is, so far,
knock on wood, not a fail after all.
We hope you like them! 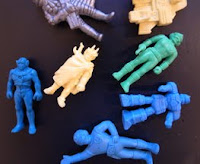 Some of my old Keshi figures.
Posted by DAVIDUGLY at 7:23 AM 4 comments:

The Uglydoll wind ups are now only a few weeks away.
We've been working on these for ages and we're very
happy to be bringing them to you now.
I grew up with those few favorites out of
Japan by Tomy which we all know. The flipping
monkey with the banana, the clear domed robot with
walking action, etc. So when it came time for us to
do wind ups, we sought out the actual team behind
these classic marvels. A longer happy story for another book
someday, but we hope you enjoy the end result!
Posted by DAVIDUGLY at 10:28 AM 2 comments: